Running his own business is no longer a pipedream for Gino

If you are looking for inspiration when it comes to choosing a career route then look no further than Gino Cara.

At 26, the former gas apprentice is already living the dream of being his own boss.

First to admit that a future in gas wasn’t something he had previously considered, he said all that changed when the right opportunity came up at NETA Training.

He said: “I had been looking for an electrical engineering apprenticeship. Then NETA got in touch about an opportunity on a gas course.”

Ready to try something new, he took the plunge and quickly found it was the right choice.

“It had never crossed my mind to study gas. Going in on that first day I had no idea what to expect,” he said. “I have gone from not knowing what I was letting myself in for, to where I am today.”

Working his way through his apprenticeship with a Hartlepool-based construction company, Gino developed the knowledge and practical skills of his trade.

And after successfully completing his Advanced Apprenticeship in Domestic Natural Gas Installation and Maintenance in November 2012, he has continued to build his experience and knowledge.

In January 2017 Gino decided to branch out and launch his own business. Gino’s Gas Services provides domestic gas servicing, fault finding and repairs.

He said: “At first I felt a bit iffy about setting up on my own, I was worried I wouldn’t get the work and, like everyone else, I have bills and stuff to pay.

Fortunately he found that everything fell into place. Today he said work is just getting “busier and busier”.

While there’s no denying his success has taken a lot of hard work and determination, he believes it’s also testament to the knowledge and experience gained through NETA so, when the time came to refresh his training, where else would he choose?

“I get asked a lot where I did my training and I always tell them I went to NETA” he said.

“The instructors are really helpful, they really support you and they have all the facilities you need in the workshop.”

Click here to find out more about the gas courses and opportunities available at NETA. 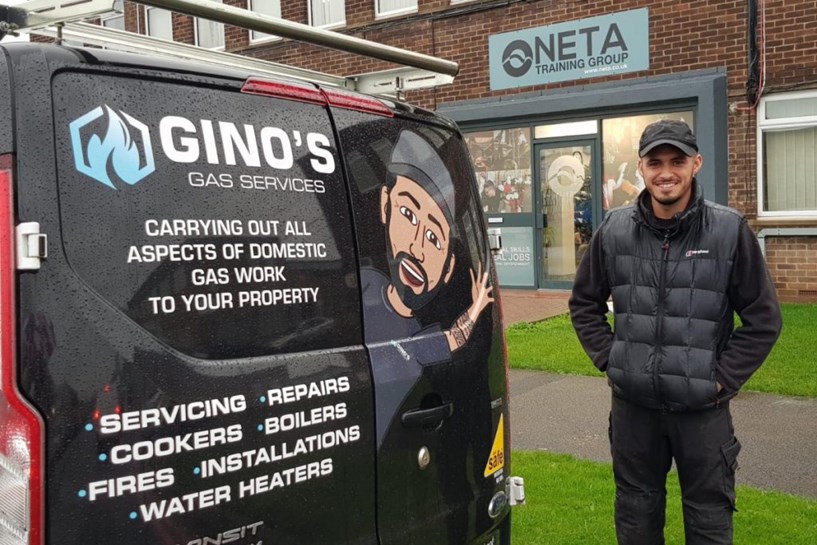